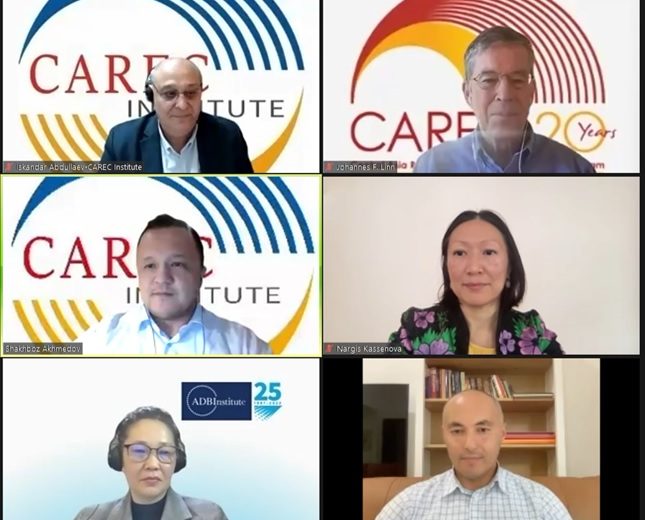 The CAREC Institute and the Center for Russian and Eurasian Studies at Harvard University jointly organized an open webinar “Central Asia’s Climate Risks: Can Energy Diversification Help?” on October 25, 2022. The webinar brought together academia, policy makers and representatives of international financial institutions to discuss climate change and mitigation measures affecting the water-energy nexus in Central Asia.

The webinar discussed vulnerability to climate change, the current state of the water-energy relationship, and gaps and prospects for regional cooperation in Central Asia, based on the findings of three recent reports published by the CAREC Institute: 1) Climate Vulnerability, Infrastructure, Finance and Governance in CAREC Region, 2) Sustainable Pathways to Energy Transition in the CAREC Region: A Governance Perspective and 3) Water-Agriculture-Energy Nexus in Central Asia Through the Lens of Climate Change.

Mr. Shakhboz Akhmedov, Senior Research Fellow at the CAREC Institute, opened the discussion by highlighting the climate change challenges and providing statistical analysis of the increasing in the frequency of extreme climate events in the Central Asian region. Countries in the region exhibit much higher rates of temperature rise than the world average over the past hundred years. The temperatures are predicted to rise in the future, influencing changes in precipitation patterns and annual volume and seasonal patterns of rivers` run-offs. This further exacerbates the water scarcity already seen in the southern part of the region.

Dr. Iskandar Abdullaev, Deputy Director Two of the CAREC Institute, further discussed the relationship between water resources, agriculture, and energy in Central Asia. Due to both continued population growth and economic development, energy projections indicate that power demand in Central Asian countries will increase by at least 50% and in Kazakhstan by almost 90% by 2050. Central Asian economies face energy shortages, aging infrastructure, and increasingly inefficient and unreliable energy-generating facilities. “Adding new capacities of all types of renewable energy sources will improve reliability and cover the energy demand in the future. However, while energy-rich countries are actively using new renewable energy resources and developing the standard principles and specific legislation, the energy-poor countries lack financial capacity and seek outside funding,” said Dr. Iskandar Abdullaev.

Dr. Johannes Linn, ADB Consultant, contributed to the discussion by highlighting the preliminary findings from a new ADB-commissioned study on climate change in the CAREC region. The purpose of the study is to identify the major climate change issues in the region and explore the role and mechanisms of regional cooperation on climate. The report identifies seven core areas that CAREC countries commonly worry about the impact of the climate change are energy, water, agriculture, transport, cities, disasters, and health. The seven cross-cutting issues for addressing climate change in the region include 1) macroeconomic management in relation to climate change and transition, 2) ICT and digital development, 3) hydrometeorological development, 4) institutional capacity in the countries for dealing with climate change, 5) the costs and benefits of climate actions, 6) just transition, in particular, the gender dimensions of climate action, and 7) how best to communicate and advocate for climate change action. The report also provides an analysis of three important policy aspects — the national climate commitment and strategies for each of the 11 CAREC countries; financing requirements and potentials; and the scope and existing institutional platforms for regional action.

Dr. Dina Azhgalieva, Research Fellow at the ADB Institute, and Dr. Farkhod Aminjonov, Assistant Professor at the National Defense College of the United Arab Emirates, further discussed the financial and public policy aspects of the transition to green electricity. 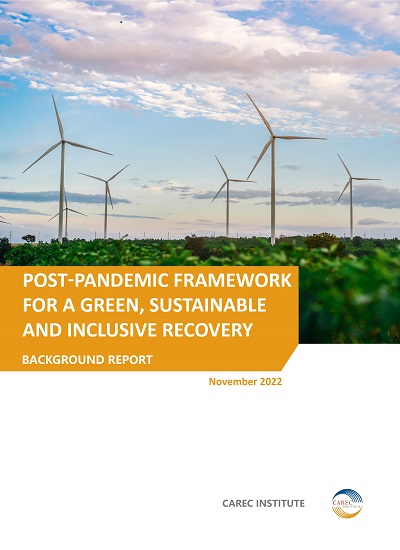